Hello Everyone and thanks for reading and supporting our website. I hope you will continue to support our website by way of visiting, sharing our site on your social media. And with your friends and family.

I recently installed a Ring Doorbell Pro and I had ran into some issues of Power. Furthermore, the Ring’s internal battery slowly died, causing the Ring not to connect. We followed the guide, check online instructions and also contacted Ring Inc. Call them at 1 (800) 656-1918. They troubleshooted us through many things, which we had done already, by following the instruction in kit, and online. The issues we were having, was that the Ring would “blink” blue, in one of the four corners of the blue Ring. When we connected the device to the doorbell wires, it was fully charged and had circle blue showing, and then it slowly began to lose power. The blue was becoming no color at all, no lighted blue. (The Ring Blue Circle Light is split in 4, making it Four quarters, per say.) (When your device is fully charged, it has the whole blue ring light, when the internal battery starts to die; it loses the quarter blue lighted rings. An indication that there’s a power issue.

Through observation, the Ring Pro, charges clock-wise and shows an indication of losing power counter-clock-wise. We saw that as it slow lost power and became white and then not enough power at all.

Basically, what “Ring” told us, was that it needed to be fully charged and it will take about an hour. So an hour passes and the device still hasn’t powered up. They asked us if we installed the power kit, that you would connect to your doorbell chime and transformer, and we did. So, we waited about an hour and worked on the Ring Stick-up- Cams, Cameras. We came back to the Pro and it had lost more of the blue lights. We were down to one. As we researched online, we found that it might be a wifi connection. So we called back support and they had us do everything all over again, asked for some code on the side of the box. After 15 mins with them, they told us it had to charge for about 8 hours; even though, the other support told us an hour.

Transformer for a Ring Device or Doorbell $30.81 The next day, the blue ring circle was gone, and it wouldn’t work at all. So we called back support and they told us to check the transformer. We checked the transformer and it seemed to be fine. So, we decided to exchange the Ring Pro out for another one. We installed it and the same thing happened. We bought a new router, because we had “Netgear” and we had read Netgear and Ring had issues had one point. Well after heavy thought, we decided to change the transformer. The old transformer was 15 va an 16 v, we switched it with a 30 va/ 16 v. So we have a new Ring Pro, a new transformer and we install everything and still the same power issue.

We drawing the conclusion that the wiring in the home was not of proper gauge wire and that it lacked the needed 16 volts to make the Ring Pro Work. We ended up buying the Ring 2, with the battery.

More of this post, is that make sure to check your power at your doorbell before installing a Ring Pro. If you are not getting 16 volts at the doorbell; then check your transformer and doorbell wires. Older homes beware of the old wires for your Ring Device and Transformer. 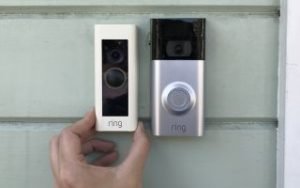